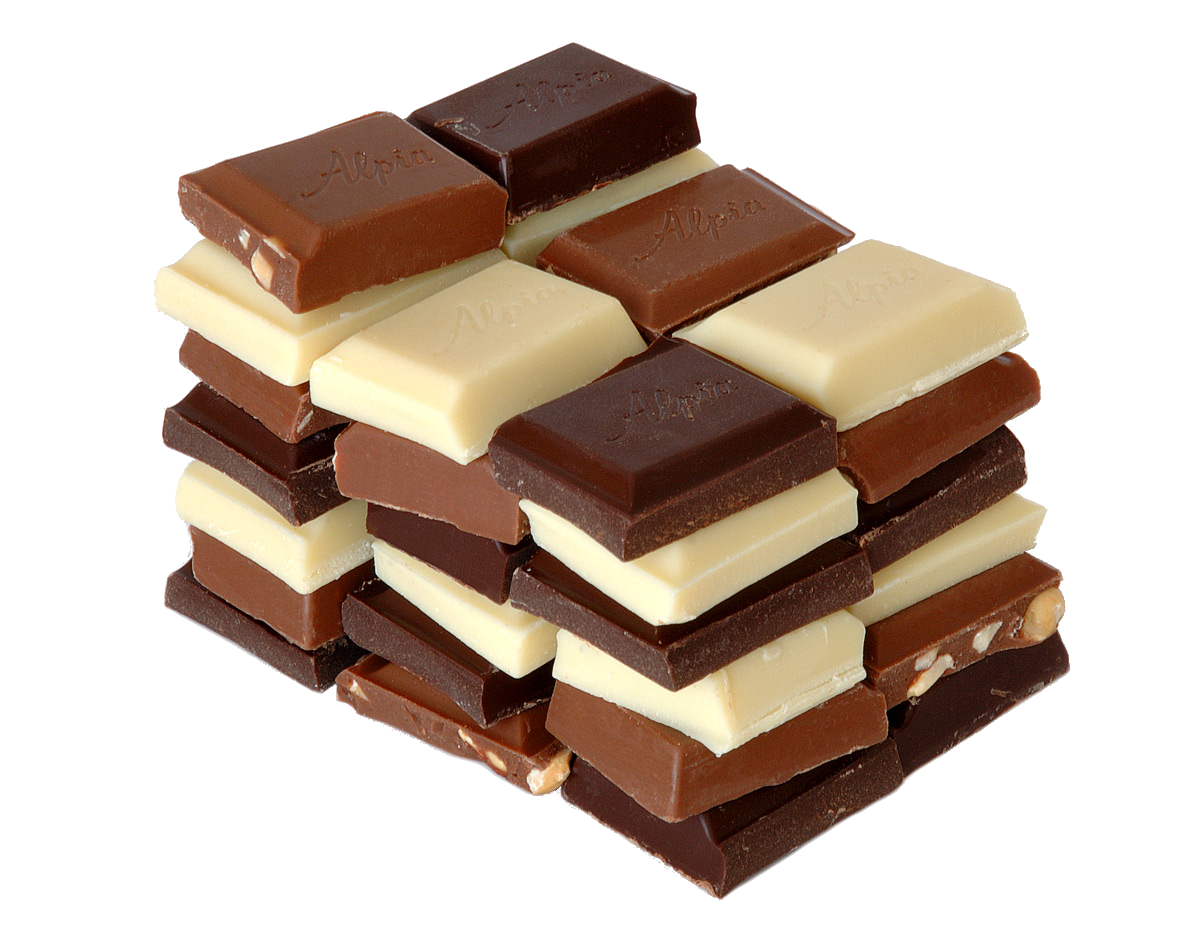 Chocolate (in Persian: Shokolaat) is a term referred to a number of raw and processed foods that are made from the seeds of cacao tree (Scientific Name: Theobroma cacao), a tree native to Mexico and the tropical South America. Chocolate is an ingredient used in various snacks and deserts such as cookies, ice cream, pudding, and pie. It can be also a cake, sauce, syrup, or candy, served melted, chilled, sprinkled, and so on. Chocolate may be boxed on Valentine's Day and egged on Easter. It can be also used in cold and hot beverages like Chocolate Milk and Hot Chocolate. In this article the healthy beneficial of chocolate, the list of chocolate festivals, quotations in favor of chocolate, the detrimental effects of chocolate, and a few facts on the chocolate production in Iran are studied and discussed.

HEALTHY BENEFITS OF CHOCOLATE: As a person bites into a piece of dark chocolate, his or her body automatically releases Endorphin that boosts both cardiovascular and mental health of that person. Endorphin is a substance secreted in the pituitary gland to remove pain and to introduce pleasure. In fact, the mere scent of the potent goodness of chocolate can put a person in a good mood and that is really what makes chocolate a magical product. The beneficial health effects of chocolate can be listed as follows:
Antioxidant Effect: Research shows chocolate contains significant amounts of phenols, the same protective agents that are found in red wine. Phenols help to keep and protect the Low Density Lipoprotein (LDL) from oxidizing. Oxidized LDL is believed to be a key factor in the development of heart disease, so anything that prevents such oxidation can also help to reduce the heart-disease risk. It is also reported that the consumption of a regular low quantity of dark chocolate reduces the possibility of a heart attack. Heart attack is considered to be the result of cholesterol imbalance. The beneficial effects of dark chocolate to the human health as related to heart and the circulatory system have been attributed to the antioxidant activities of Epicatechin which is present in this product.
Chocolate is also a very good source of copper, an essential element in nutrition. "The bean from the cacao tree is naturally abundant in copper. Fortunately, much of the copper is retained when the bean is processed into cocoa or chocolate" noted Carl Keen, Professor of Nutrition and Internal Medicine at the University of California at Davis. Nancy Betts, Professor of Nutritional Science and Dietetics at the University of Nebraska, wrote that, "The typical American diet is low in copper. The recommended safe and adequate range is 1.5-3.0 mg per day, but the average intake is about 1.2 mg. Copper functions as an antioxidant and helps with wound healing, but its most important function is to work with iron in building blood cells and transporting oxygen".
Anticarcinogenic Effect: Evidences from the laboratory studies have revealed that cacao and dark chocolate flavonoids may possess some anticarcinogenic mechanisms. More research works are however needed to elucidate the role of cacao and dark chocolate in fighting cancer.
Aphrodisiac Effect: In some cultures, chocolate is believed to function as an aphrodisiac, a substance which excites sexual desire. (Aphrodite is the Greek goddess of love). It is documented that the ninth Aztec emperor Montezuma (reigned 1502 - 1520) used to drink chocolate syrup before going to his harem. However, the aphrodisiac effect of chocolate is yet unproven.
Other Effects: A study carried out by researcher David Lewis and reported by the BBC indicated that melting chocolate in one's mouth produced an increase in brain activity and heart rate that was more intense than that associated with passionate kissing, and also lasted four times as long after the activity had ended. Chocolate appears to soothe and moisten the throat. According to some research works, chocolate may be effective in preventing the persistent coughing. Theobromine, aka Xantheose, is an alkaloid of the cacao and chocolate. This alkaloid has been found to be almost one third more effective than Codeien, the leading cough medicine. It has been also suggested that the flavonoids present in chocolate may cure diabetes, diarrhea, and other diseases.

QUOTATIONS IN FAVOR OF CHOCOLATE: Here are some quotations that indicate the healthy benefits of chocolate:
The superiority of chocolate, both for health and nourishment, will soon give it the same preference over tea and coffee in America which it has in Spain: 3rd US President Thomas Jefferson (1743 - 1826).
All I really need is love, but a little chocolate now and then does not hurt! America's Most Endearing Artist Charles M. Schulz (1922 - 2000).
It is not that chocolates are a substitute for love. Love is a substitute for chocolate. Chocolate is, let us face it, far more reliable than a man!  Author and Columnist Miranda Ingram.
After about 20 years of marriage, I am finally starting to scratch the surface of that one. And I think the answer lies somewhere between conversation and chocolate: Movie Actor Mel Gibson in What Women Want.
Research tells us 10 out of 14 individuals like chocolate: American Author and Songwriter Sandra Keith Boynton.

DETRIMENTAL EFFECTS OF CHOCOLATE: Chocolate and the candy bars certainly taste good and have potential beneficial health effects in human nutrition. But people should be also advised that eating chocolate in excessive quantities may increase the risk of obesity without a corresponding increase in activity. And obesity itself is a risk factor for many illnesses like cardiovascular diseases. Steve Infanti quoted researcher Bloom who wrote that, "Headaches may be caused by the Phenyl Ethyl Amine (PEA) in chocolate because PEA dilates blood vessels in the brain, a move that can trigger Migraines. It can also promote heartburn by causing a backup of acids from the stomach into the esophagus". Research has also shown that milk consumption can cause acne, including any which is mixed with chocolate. Besides, chocolate has one of the highest lead concentrations that constitute a typical Westerner's diet. This may lead to a mild lead poisoning. Though studied indicate that the lead consumed through chocolate may not all be absorbed by the human body, there is no recognized threshold for the effects of lead on children's brain function and even small amount of lead can cause permanent neurodevelopment deficits such as impaired Intelligence Quotient (IQ) in early life.

FEW FACTS ON THE CHOCOLATE PRODUCTION IN IRAN: Here are a few facts on the production of chocolate in Iran:
A. The first evidence of chocolate consumption in Iran comes from a book written in 1662 by the British court physician Henry Stubbe praising the beneficial qualities of chocolate. At the time, Charles II (1660 - 1685) was the King of England and the seventh king of Safavid Dynasty, Abbas II (1642 - 1666) was the Shah of Iran. On the basis of Dr Stubbe's book, in 1662 chocolate had already spread in the Middle East as far as Turkey and Iran.
B. The first factory to manufacture chocolate in Iran was established by two Russian immigrants in Tabriz, the capital city of Azerbaijan province, in 1920 when Ahmad Shah Qajar was in power in Iran.
C. In Pahlavi era (1925 - 1979), and particularly during the reign of Mohammad Reza Shah (1941 - 1979) when industrial activities were rapidly developed in Iran, many companies and factories of confectionary and chocolate were established in different parts of the country.
D. In recent years, the chocolate production has been boosted up in Iran due to the increasing demands by some Muslim countries for the Iranian chocolate. It may be due to the fact that those Muslim countries banned Danish and some European chocolates after the controversy caused by a cartoon printed in some journals and magazines in Denmark.
E. Samples of the various chocolate products manufactured and marketed in Iran are being displayed in the Exhibition of Iranian Biscuit, Confectionary and Chocolate (in Persian: Namayeshgaah-e Biskooeet-o Shirinijaat va Shokolaat-e Iran) which is held annually either in Tehran or in one of the cities in different provinces of the country. The most recent one named as 8th International Exhibition of Biscuit, Confectionary and Chocolate was organized by the Association of Iranian Confectionary Manufacturing Companies and it was held in Tehran from 19 to 22 October 2009.

EPLILOGUE
Research suggests that up to 97 per cent of women and 68 per cent of men experience food cravings, and the chocolate is among the most common craved food. Yet, chocolate should not be a significant source of calories in the daily diet of any person. The bottom-line, as many nutritionists advise, is moderation. And if you got a craving for chocolate, never go overboard since too much of something good  and beneficial can be also bad and harmful!